Bird Boxes for the Nature Strips!

There are a mixture of kits which are designed to make nest boxes suitable for robins or bluetits. The kits come as pre-cut timber with all screws and fittings included and are easy to assemble. If you would like to join the Nature Strip volunteers to give a hand in building the boxes and learn a bit about birds then please come along to the bowling club. All necessary tools will be provided and there will be time for refreshments too.

NEW TREE FOR THE NATURE STRIPS

On Saturday 27th October 2018, the first new tree for decades was planted in the nature strip between Wilton and Lygon Road. It’s an evergreen cotoneaster watereri which will have spring flowers and crowds of red berries much loved by birds, especially 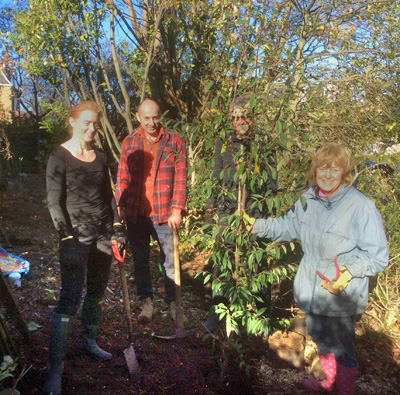 migratory redwings who arrive in our area every January. Volunteers Simon Gage, Louise Baker and Graham Miller had to use mattocks to break through the hard, root-bound soil to prepare the ground and are to be congratulated for their supreme efforts. Since then four more trees have been planted- Rowan, two kinds of hawthorn ( one with white and the other crimson spring blossom) and a cherry (autumnalis Rosea). 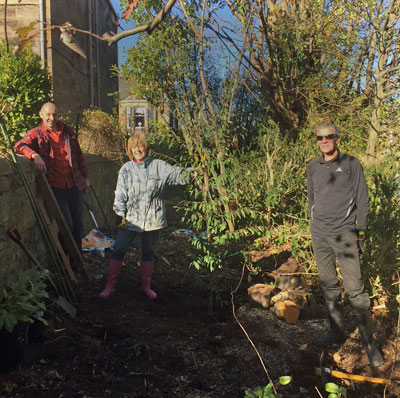 nd the huge quantity of special soil which is essential for their well-being.
There is still a lot of work to be done to fill the area where the laurels used to be and volunteers are currently planting shrubs to provide privacy and security to the garden adjacent to this part of the strip. We have put in three pyracantha, Berberis, climbing rose, ceanothus, flowering currant and viburnum fragrens.

In the other strips, winter tidying has begun and in strips 1 and 3 work is beginning to reduce the laurel. Mike Shields has given a sack of bulbs for all the strips and these will be planted soon. If you’d like to help with this, please contact me ‘Wilma Elton’ or any of the other volunteers.

Nature Strip 4
Over the long winter season we continued wi

th the clearance of the dense laurel in Nature Strip 4 and made very good progress. Clearing work stopped when spring arrived and the birds started to commence their nesting activities. The snowdrops planted last year made a welcome appearance in February and lesser periwinkle (Vinca minor) and honesty (Lunaria annua) are presently blooming. At the Gilmore Road end of the strip the woodruff (Galium odoratum) and ferns (Asplenium scolopendrium) which were planted last year are starting to become established. We are still working on removing the last of the substantial laurel stumps and roots at the Craigmillar Park end of the strip in preparation for planting. This year there will be annuals planted in this area.

Saturday 27th January 2018, it was the windiest day of the weekend (SSW to WSW winds from 21 to 24 mph). Thankfully the rain from earlier in the morning had stopped and when we began it was mild and dry but overcast. We had decided to do the RSPB big garden birdwatch between 11 am and 12 noon to avoid the morning chill. Our four volunteers

managed to watch all five nature strips and while many of the usual birds were spotted there are a few ordinarily seen while working in the strips which did not show up.

Sadly the robin which regularly keeps up company on Nature Strip 4 when we are breaking ground was not seen, nor the wren which has been spotted in this strip. The RSPB specify that only birds which land in the area can be counted.The maximum number of a type of bird seen at any point in time during the hour is the number recorded, this avoids counting the same birds twice. At some points there was frustration when a bird flew over but did not land or when birdsong could be heard from the trees but sightings remained elusive. The birds recorded for each strip are noted below. 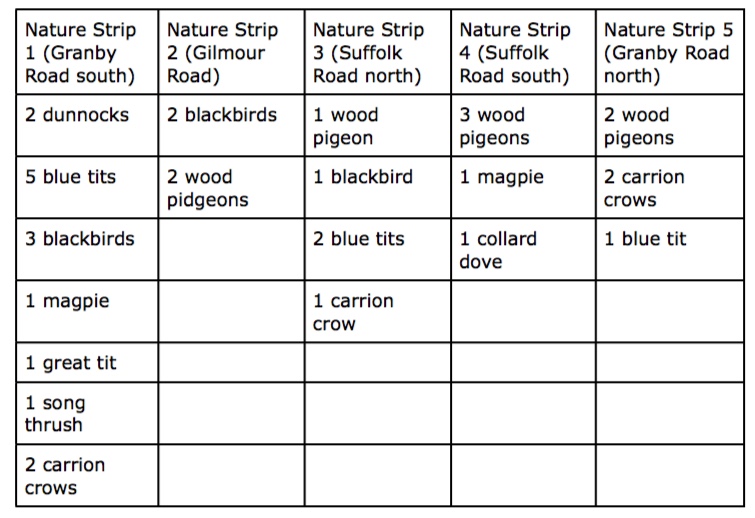 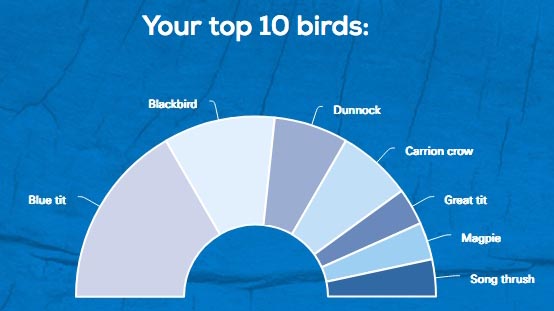 The hour provided an enjoyable time to observe the behaviour of our avian neighbours in the Nature Strips. Christine saw a magpie in an adjacent garden chasing three blackbirds that then flew into the nature strip enabling a good spot. Hopefully our Nature Strip work will enhance the habitat for them in the future.

Here is a PDF of the talk given by Ian Morrison, the Tree and Woodlands Officer of Ediburgh Council. Here is his detailed tree survey of Strip 1.

At 3pm on Tuesday 26 September members of the CPA met in East Suffolk Road to watch the re-location of the listed Pavilion by the developers .

When permission was granted to build on the former playing field, CPA, with residents in Crawfurd Road, had achieved the concession from the ECC planning committee that the listed Pavilion should be conserved and that the public space surrounding it should be landscaped to provide public access. This is the first stage in realising this decision and we look forward to further developments.

“Places, people and planning” – A consultation on the future of the Scottish planning system

On 10th January the Scottish Government published this consultation paper setting out key components of a new Planning Bill to be brought forward in year 2 of the present Parliamentary Session.   The proposed changes to the planning system are derived from the Review Panel Report published last year and the subsequent working parties established to consider various aspects of the planning system and possible reforms.  The consultation ran until  April 2017. As a result, the Scottish Government has indicated that it will present a Planning Bill before the Scottish Parliament in 2017/8. However no precise timetable for the Bill has yet been published. ( as of 2nd November 2017).

Reviewing the Management Plan for the Old and New Towns of Edinburgh World Heritage Site.

The Management Plan identifies what is significant about the World Heritage Site, recognises challenges and threats, and sets out policies to preserve and enhance the Site. This new survey gives everyone the chance to let us know how well you think the Old and New Towns of Edinburgh work as a place to live, work and visit. Click HERE to visit website and read the feedback. A further meeting will take place in November 2017 to discuss all the responses to the Plan.

Survey into range expansion of an Allium paradoxum population in Craigmillar Park.

Ealier this year we were asked for help from University of Edinburgh students who were doing a survey of invasive plants in our area. We thank Shona Irvine for sending the report. Read an abstract of the Report:

Allium paradoxum is an invasive plant originally from Central Asia and introduced into the UK in 1823. A

n invasive plant is a plant species that causes problems for an area (economic or otherwise). A. paradoxum. is considered invasive as it outcompetes native plants and forms monocultures in woodlands and near waterways. We investigated whether a specific A. paradoxum monoculture in Craigmillar Park is spreading and any management strategies that could be used to counter this. We mapped the density of an A. paradoxum population and found that the density was lower around its edges and thus it’s spreading. More…

Situated within the Craigmillar Park Association conservation area, the five Nature Strips between Granby Road and Craigmillar Park, in the south of Edinburgh, are an asset to the area, both in terms of providing valuable habitat for wildlife in an otherwise residential setting, in addition to enhancing the green space of the area with the additional health and wellbeing benefits this provides to residents. More…..

This application, which was supported by the community council, was approved on 7th November 2016.   The site covers the southern part of the King’s Buildings Campus bounded to the north by Max Born Crescent. It is not in a conservation area, but is bounded to the west and south by scheduled Open Space and Green Belt and to the east across Mayfield Road by the Craigmillar Park Conservation Area.   This substantial project is the first step in the programme of major investment by the University at this Campus as described in the talk at our last AGM.

Here is the talk by Frances Linsay given at last years AGM.

Frances Lindsay first got interested in composting about ten years ago after seeing an advert by the Council for volunteers to train as Master Composters. The main purpose of this scheme was to encourage people to compo 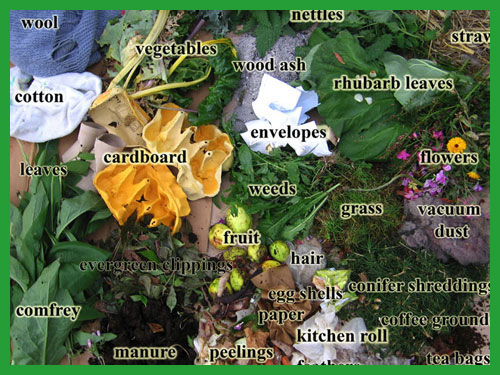 st their kitchen and garden waste instead of filling their dustbins with it. At that time (2004) about one third of an average dustbin’s contents was biodegradable material. So she trained as a Master Composter and to spread the composting message gave talks to community groups, engaged members of the public at events, handed out leaflets and visited householders who requested help with composting problems. Since that time the brown bin garden rubbish collection has been extended across the city and now that the food waste caddy collection has also been introduced, the Edinburgh Master Composter project has ended.  Read the PDF.

The Community Council is a member of the Cockburn Association (For everyone who loves Edinburgh) Here is a link to their latest NEWSLETTER.

This SDP covers the SESplan area from the Borders to part of Fife, including Edinburgh. The members of SESplan are City of Edinburgh Council, East Lothian Council, Midlothian Council, West Lothian Council, Fife Council and Scottish BordersCouncil.   The SDP sets the strategy for Local Development Plans (see above) and the new plan SESplan2 was to replace in 2018 the 2013 SDP SESplan covering a 20 year period. Only in May 2019 did the Scottish Government issue its decision to reject the plan on the grounds of an Inadequate Transport Appraisal and other transport issues. It is not yet clear what happens now!

Our secretary has put together a comprehensive list of all the important buildings in our area.